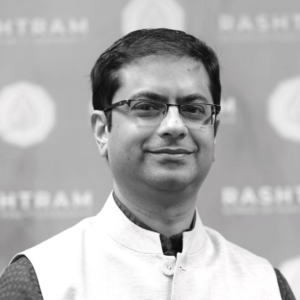 Shobhit Mathur holds B Tech in Computer Science and Engineering from IIT Bombay. He completed his MS Computer Science and Engineering from the University of Washington in 2006. After a brief stint of volunteering in Suriname, he joined Amazon as a database engineer in Seattle. Along with his day job, he volunteered for many Hindu faith-based organizations in the USA. After completing 5 years in the USA, he returned to India to pursue his calling & contribute to the motherland. He first started his stint with Youth For Seva, to connect youth to society through volunteering & lowering barriers for their participation in nation-building.

After scaling YFS nationally, he decided to go back to school and did his MBA from the Indian School of Business. He stepped out of the placement process and established the Vision India Foundation with his friends from various IITs. VIF was aimed at engaging bright young minds in policymaking and governance. After 5 years, VIF transformed into the Rashtram School of Public Leadership. Shobhit heads it as the founding Dean.