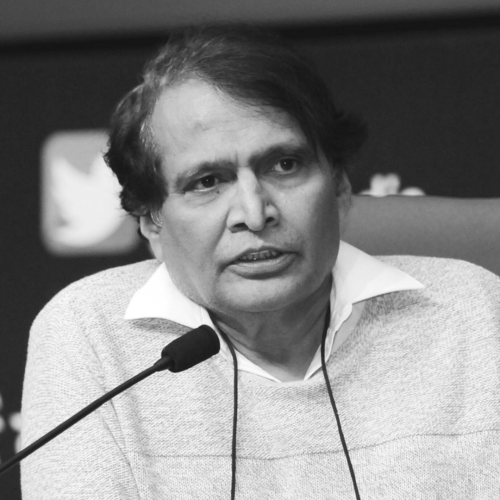 Shri Suresh Prabhakar Prabhu is a veteran politician and diplomat who has held key positions such as the Minsiter of Civil Aviation, Railways, Commerce & Industry among others. He has also served as India’s Sherpa to the G7 and G20. He is a Chartered Accountant by profession, and is a member of the Institute of Chartered Accountants of India (ICAI).

He has been a Member of Parliament (Lok Sabha) for 4 consecutive terms from 1996 10 2016, and later a Member of Parliament (Rajya Sabha) since 2016. He has held several government and semi government positions, that includes the Chairmanship of Maharashtra State Finance Commission, Saraswat Co-operative Bank, Member of the Maharashtra Tourism Development Board, among others. He is a part of various global organizations and strategic dialogues including the Global Water Partnership, World Economic Forum, United Nations Development Program, Asia Energy Forum, United Nations Committee of Biodiversity and is a also a member of the Board of Advisors of India’s International Movement to Unite Nations.

Suresh Prabhu has constantly featured in the list of top five ministers in India from 2014 to 2017 in terms of both performance and accessibility in nationwide surveys conducted by various institutions. He was the 2nd best performing Minister in India Today’s report on the performance of key ministers of Govt. of India; was awarded ‘Indian of the Year in 2017; and was declared “Best Member of Parliament in 13th Lok Sabha” by Aaj Tak. He was also featured amongst top three Indian leaders of the future in the cover story of the Sept 2000 issue of the Hong Kong based Asiaweek Magazine.