Sri Aurobindo – a revolutionary, nationalist, poet, educationist, philosopher and yogi- showed the path to tap into the Divine Shaktis. Rishihood University tries to channelise the Divine Shakti-s to nurture public leaders who are “self-aware and civilisationally-assured”. Sri Aurobindo and The Mother remain a central pivot in understanding our knowledge traditions thereby solving the crisis of our times. To commemorate the 150th year of Sri Aurobindo’s birth anniversary and 75 years of India’s Independence, we have launched a host of year round courses.

“What Sri Aurobindo represents in the world’s history is not a teaching, not even a revelation; it is a decisive action direct from the Supreme.” -The Mother

Despite centuries of progress, nations and people across the globe are encountering the same old problems. The established intellectual frameworks and the institutions have only languished. The world is constantly being buffeted by the rise of newer belligerent nations dreaming of world domination, virulent diseases, technological hazards, economic and religious turmoil, and social conflict. We have mistaken the symptoms for the deeper causes of our problems and overlooked the lasting solutions that have always been within reach.

Indeed, Sri Aurobindo, widely known as nationalist, revolutionary, philosopher, poet, yogi and guru, wrote clearly in 1947 that what was required was “a step in evolution which would raise man to a higher and larger consciousness and begin the solution of the problems which have perplexed and vexed him since he first began to think and to dream of individual perfection and a perfect society”. To understand the implications of this statement it is necessary to know deeply about the works of Sri Aurobindo whose sesquicentennial birth anniversary will be celebrated on 15th August 2022.

Who should enrol for the course?

Are you the right fit? Click on tiles to expand.

Do you aspire to solve problems? Do you have an inquisitive spirit? First soak in the life and works of Sri Aurobindo. Then be a part of India’s renaissance in whatever field you are. The integral education of Sri Aurobindo will empower you.

What is Bhakti? Sri Aurobindo says it is complete surrender to the Divine Mother. Who is the Divine Mother? How and why surrender? The secret knowledge of the Gita, Upanishads, Life Divine, Savitri will be revealed.

Are you a student of humanities and social sciences? As literati, have Sri Aurobindo’s poetry and epics touched you? Do you want to scrutinize current ideologies and policies and get challenged? The course will enable you to publish quality research and influence academics and policies.

What is the next step of evolution? Can machines become conscious? Do new disciplines like string theory, epigenetics and neurosciences excite you? Then use Sri Aurobindo’s ideas of Integral Yoga and Super Mind to sharpen your understanding.

Is Westphelian nation-states the only model for nationalism? Expose yourself to Sri Aurobindo’s nationalism. Travel to the Swadeshi movement of India’s freedom struggle. Be a revolutionary. Unlike the mainstream ideas of revolution that contemporary academics and media preach.

The pandemic has changed your life. Why don’t you start changing your way of life, too? Let us remove the veil of ignorance and explore life. The Divine Mother will help you only if you help yourselves. The course is designed to suit your schedules and taste. This is your right time.

The guide in your learning journey. 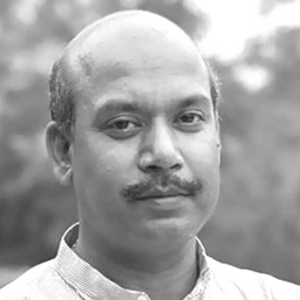 The course is aimed at

After the completion of the course
Year-Long Celebration of

Sri Aurobindo – a revolutionary, nationalist, poet, educationist, philosopher and yogi- showed the path to tap into the Divine Shaktis. Rashtram School of Public Leadership tries to channelize the Divine Shakti-s to nurture public leaders who are “self-aware and civilisationally-assured”. Sri Aurobindo and The Mother remain a central pivot in understanding our knowledge traditions thereby solving the crisis of our times. To commemorate the 150th year of Sri Aurobindo’s birth anniversary and 75 years of India’s Independence we are launching a host of year round programmes, courses and events.

Volunteer To The Cause Of Disseminating Sri Aurobindo’s Message

As part of the year-long celebration of Sri Aurobindo anniversary we are conducting many events, conferences and study weeks apart from the course “Sri AUrobindo-The Rishi of India’s Renaissance”. We would be publishing books/compendiums for each event and course.

We cordially invite academically-inclined participants reverential to Sri Aurobindo’s teachings to help us organise the sesquicentennial birth anniversary celebrations of the rishi.

Volunteers must have the necessary skills of good listening, writing, and effective editing for taking summary notes of various lectures, workshops, conferences and events, and other tasks.