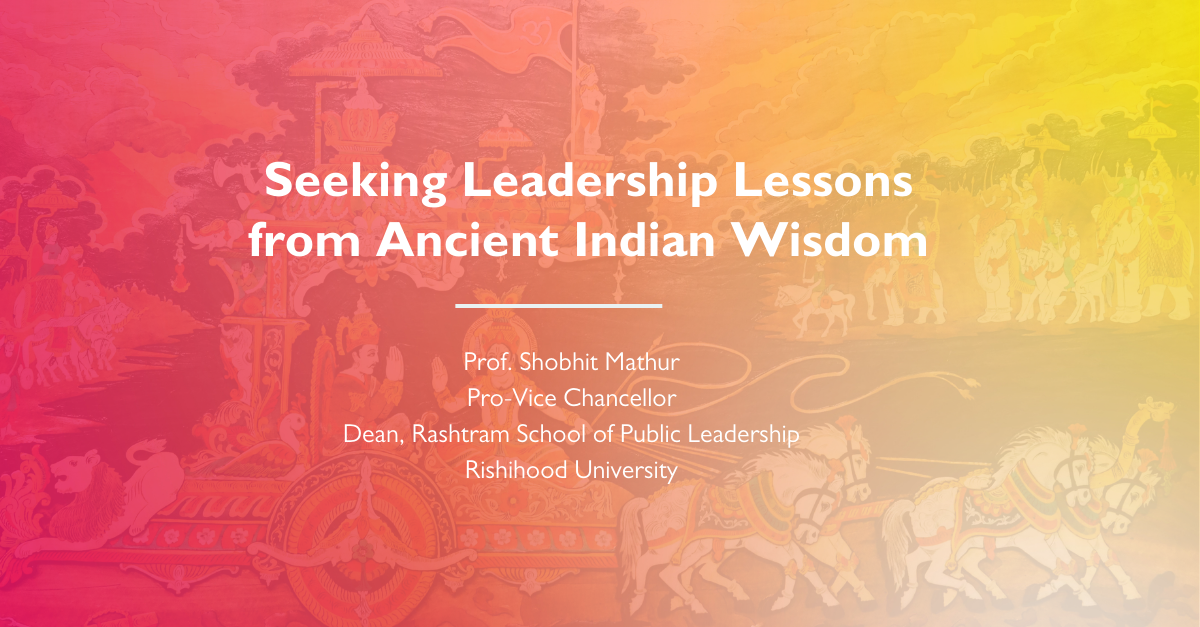 2022 is here and a new year calls for a different and new perspective on leadership. Today’s leadership challenges include 3 major areas – terrorism, climate change and depression. In my opinion, the remedy for the 3 big challenges lies in the Indian scriptures like Mahabharata, Ramayana and more.

Mahabharata is a big part of the Indian knowledge system and contains leadership lessons for every place, age and context. Raja Dharma from Mahabharata helps us understand the duties of a leadership figure. The first duty is Yoga-kshema which is arranging for the acquisition of what the people lack and the preservation of what they already have. The second is Loka-sangraha, which is about encouraging people to undertake their own duties and prevent them from taking the wrong path.

Bheeshma, also, teaches lessons on leadership to Yudhishthir which include the importance of being a king, the role of citizens, general principles of governance, strategies to deal with enemies and how should a King’s knowledge, behaviour and character be.

There is a range of topics in ancient knowledge that elegantly describe public leadership. It throws light on how important it is for a king to gain victory over his mind first and focus on righteous conduct and the truth, before he tries to battle against his enemies.

The point about keeping in control of your mind, conquering your senses is brought up in Mahabharata and later, by Chanakya, repeatedly. If we look at leaders today, we’ll understand that most of their failures have occurred when things fall apart; they lose control of their senses and it gets chaotic.

But could any leader conquer the senses? And are leaders made or are they born? According to Mahabharata, learning comes as ¼ from teachers, ¼ from one’s own intelligence, ¼ from peers and ¼ over time.  This learning process defines how we can create leaders and helps us understand the importance of having teachers as role models, also known as acharyas. It is also essential that a leader taps into learning from within and thereon continues to acquire lessons through life experiences.

All that I’ve brought forward is our civilizational wisdom and even today it provides us tools to create leaders who can awaken India for its needs and global consciousness. The knowledge through scriptures is endless and there are more, like Ramayana, which include timeless lessons by Lord Rama on public leadership and the importance of Indriya-Jaya. Lord Rama also talks about the knowledge of Vedas, creating a circle of influence and lists various topics a leader should know like agriculture, trade and many more.

If we look at all these lessons from a political perspective, it can help present leaders learn from their ancestors. Modern mantris should realise that external skills are incomplete. Infact, the foundation is built by imparting scriptural knowledge and letting it culminate into wisdom through experiences.

The wisdom we receive through these lessons help in building strong leadership characteristics and make for a righteous leader who encourages righteous conduct. This way the state will lead by example and will sustain an overall righteous order. There are certain modern-day references from around the world who have tried to establish institutions to create public leaders during a crisis. Here are some examples:

In the 1870s, the Franco-Prussian War took place and the French army lost the battle due to their outdated military education. Thereafter, they built an institution called Sciences Po to create the next generation of public leaders and bring France out of its moral and political crisis.

Another example is Japan wherein The Matsushita Institute of Government and Management was established with a purpose of creating leaders who can envision an ideal Japanese society and make it a reality.

These countries developed institutions based on their context and ethos of the country.

In India, not too many leading institutions have been formed except Takshashila and Nalanda and most educational institutions focus on job skills training and placement.

At Rishihood University, we have built our foundation in the Indian knowledge systems that define our Swabhava (our innate nature) and Swadharma (how we can contribute best to our civilization).

We hope to bring forth various leadership lessons from our ancient Indian knowledge heritage and connect it to our current understanding of the world, in order to bring about a new perspective.